It was in the monsoon of last year, my previous visit to Nedumkayam forest in which I was lucky enough to meet a tusker in between the tall teak woods. This time also the same hope led me with my friend Abbas towards Nedumkayam when I got a holiday on account of Mahanavami.


Nedumkayam is located near Karulayi village, 14km away from Nilambur town, Malappuram district, Kerala, India. Visitors and tourists are allowed to enter into the forest here and the entry is controlled by tickets sold through the forest department at the entrance of the forest. Adults and vehicles are charged seperately and the amount is as meagre as Rs 20 for each adults. We took two tickets and they charged Rs 10 for our byke also.  The counter was busy with selling of fresh forest produced honey also.


We slowly started our ride through the jungle.   We moved ahead enjoying every single moment.  After passing a couple of kilometers, we reached near Nedumkayam river.  There was a bridge also to cross the river. The side walls of the steel made bridge was partially dilapidated. But totally the bridge looked safe.  Our byke was not allowed from there ahead. We parked it in the space allowed there. On the bridge there was a warning board that says about the danger of swimming in the river. Many people were drowned here before and the dead ones  included a british engineer Mr ES Dawson(1897-1938), who built this bridge. His body was cremated here inside the forest and the tomb is still neatly being looked after by the forest department.


Another attraction here is 'Aanappanthi', which is the Malayalam traditional name for elephant taming centre. Decades ago, it was a busy place of elephant training. A board here says that approximately 41 elephants were trained here at a time before.

A tribal settlement also was there which comprises approximately 25 huts and a small school also. Let me post a few pictures also  that will speak more than what I narrated here. 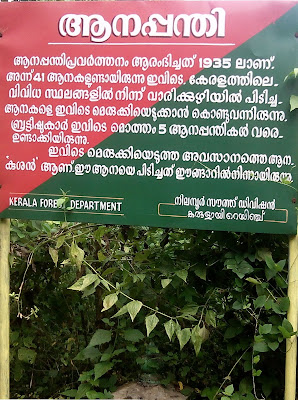